The week before JavaOne, I traveled to Ottawa to attend PGCon, the PostgreSQL Conference. I had the opportunity to spend the weekend following the conference with my wife, Linda, and our 6-month-old son, Elliot. We enjoyed ourselves! Ottawa is a great place to be a tourist for the weekend.

As usual with PGCon, I learned a lot at the talks, and I met interesting like-minded people in the hallway and after hours at the social events.

The last session of the conference was a general session which consisted of a series of lightning talks. Some of the talks were funny, others were informative, and some skillfully combined those two qualities. Very late in the game (Friday morning), I decided I should give a lightning talk about Power*Architect, an open source project I have the privilege to maintain as part of my day job. I had spotted a Power*Architect screenshot on Thursday in Steve Singer's OpenStreetMap session. I got to thinking there were probably several people at the conference who could use an ER diagramming tool with forward and reverse engineering, so I got up early on Friday and put together a small set of slides for a sub-5-minute talk introducing the Architect.

I sent off the slides to Selena Deckelmann, who was in charge of that session, and got back an answer right away: the lightning talk schedule was already full! Selena invited me to blog about it instead, so here I am.

Without further ado, an introduction to Power*Architect in 5 minutes or less:

E-R Diagramming
What is Power*Architect? In a nutshell, it's a visual data modeling tool that lets you work with E-R diagrams that look like this: 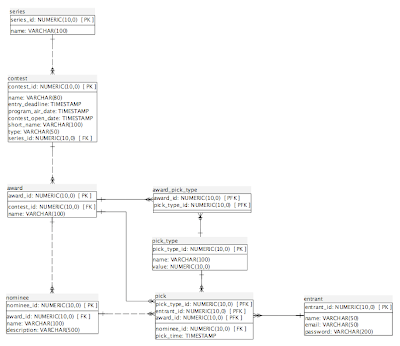 Reverse Engineering
We have intentionally made Power*Architect easy to learn and easy to use. For example, reverse engineering an existing database complete with foreign keys, data types, default values, sequences and autoincrement columns, indexes, and remarks is a simple drag-and-drop (or copy-and-paste) operation. There are no knobs to turn. It just works like you expect!

Forward Engineering (DDL Generation)
Similarly, forward engineering your data model into a database is a simple affair. Simply tell the Architect you want a create script, and tell it which dialect of SQL to use. If you connect to the database where you want to create all those objects I mentioned above, the Architect will execute the script for you (you can also save it to a file if you prefer).

The reverse- and forward-engineering features together make the Architect a really simple tool for migrating an existing database from one platform to another--hopefully from other platforms to PostgreSQL, but that's ultimately your choice to make. :)

Multiplatform - OS
Power*Architect works on all platforms where a full Java 5 runtime environment is available. We develop and test it on Mac OS X, Linux, and Windows. We also know it works great on Free/Net/OpenBSD and Solaris.

Multiplatform - DB
The Architect also works great across database platforms. As I already mentioned, you can even directly compare, for example, a MySQL database to a PostgreSQL schema. The Architect handles implementation details such as sequences vs. autoincrement columns automatically. The current list of fully supported databases is: DB2, HSQLDB, MySQL, Oracle, PostgreSQL, and SQL Server. Reverse engineering is possible on a larger number of platforms, but forward engineering to those platforms is unlikely to work.

Free, in the wider sense
Power*Architect is distributed under the GPLv3. We develop it completely in the open. There is no hidden backend source code repository or anything.

For more information
See the Architect's product page for the download link and more marketing.

We have two other free and useful database tools, too! One does data cleansing (de-duping, reformatting/augmenting, and address correction), and the other helps you to produce ad-hoc reports. See the SQLPower software page for details.
Posted by Unknown at 6:03 PM