One of the great things about living in Toronto is the abundance of corner stores with fresh, cheap produce. There's at least one within walking distance of most inner city houses and apartments. Stores like these are made possible by the Ontario Food Terminal, a wholesale market where producers lease stalls and buyers can enter for a small fee. From the mom & pop operation down the street to the multinational megamarkets, all kinds of buyers show up early every morning.

The selection at the corner store tends to be smaller, fresher, and cheaper than the megamarts. Beyond the traditional Western staples of carrots, onions, potatoes, and so on which are always available, I imagine the selection is based mostly on what was cheapest or best presented last time the owners visited the food terminal.

For the past 4-6 weeks, our local store has kept a big box of small cucumbers filled. The sign says they're "Dill Cucumbers." I'm not sure if there really is such a thing (maybe that's what they're really called!), but turning them into dill pickles sounded like a fun project. So I bought some.

I don't have any canning experience or equipment, so I started by looking up recipes for refrigerator dill pickles. There are many to choose from, and my survey of 10-15 of them tells me the essence of the dill pickle brine is vinegar, water, kosher salt, and dill weed or seed. I combined the following in a saucepan and brought it to a boil: 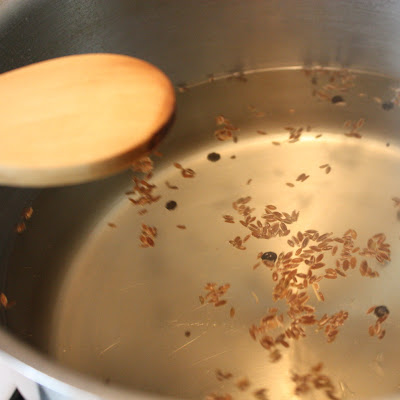 Once the salt dissolves into the brine, it doesn't add much volume. You can ignore it in your calculation. So, you can make 1 litre of brine using 75cL water, 25cL vinegar, and 62.5mL salt.

Some recipes call for boiling the brine where others say to just work with room-temperature ingredients. I decided to boil the brine mostly because I believed it would extract more flavour from the spices, and perhaps speed up the initial stage of the pickling process. Maybe next time I'll try it at room temperature to see if it makes any difference.

Of the recipes that did call for boiling the brine, a few of them said to chill the cucumbers in an ice water bath before pouring the brine over them. The claimed advantage is that the pickles will come out crunchier if you chill them first. I did this. It makes sense--cold pickles should be less likely to get cooked by near-boiling brine, but of course the cold probably cancels out the possibility that the hot brine will kick-start the pickling process. 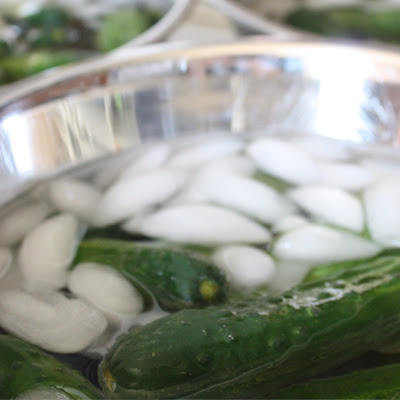 After their ice bath, I packed the following into three jars (I later discovered we had a large jar big enough to hold everything. I'll use that next time!) 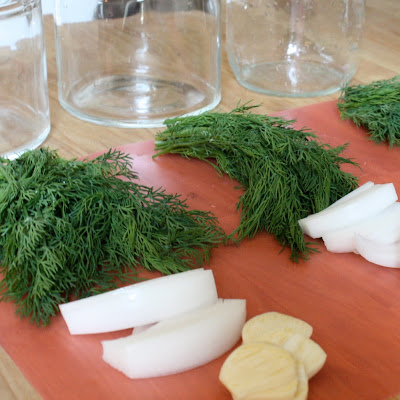 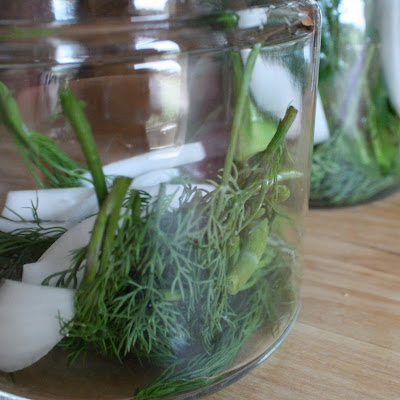 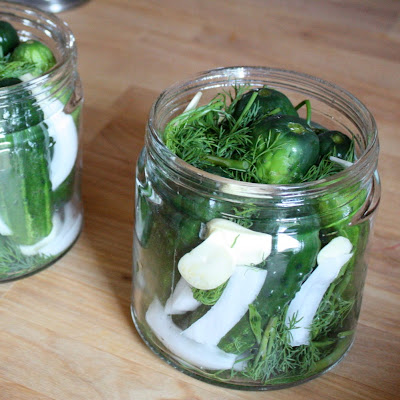 Then I poured the boiled brine over the ingredients in the jars, lidded them, and waited for them to reach room temperature (several hours). 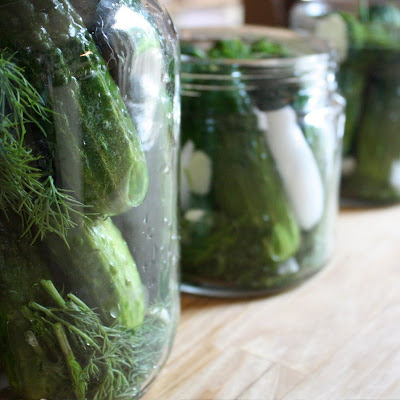 How long did they take to become pickled? I tried one after a few days, and it was mildly pickled. I was actually worried that there was too much water and not enough salt and vinegar in the brine. But after a full seven days in the fridge, the cucumbers were pickled all the way through and had a pleasant abundance of sourness and saltiness.

I was surprised that the dill flavour was less prominent than expected. Dill is a distinctive flavour, but quite mild. I assumed a whole batch of dill weed plus some seeds would have provided sufficient flavour. Perhaps with more time in the fridge, the dill flavour would have become more pronounced. Which brings me to my next point…

These pickles were quite popular, both with us and our guests! They were completely gone within three weeks of my making them, which effectively means we ate them all in the two weeks after they "matured." A store-bought jar of pickles typically lasts several months in our house.

In conclusion, making refrigerator dill pickles was fun and easy. Not only would I do it again, but I already have. The second batch is ready for consumption. I think I'll go have a pickle now.
Posted by Unknown at 11:55 AM